It was a pet-filled weekend at Next Gen House.

Sadly, Winter isn’t living with us anymore. Long story short, he had a polyp removed from his ear right before we got him several weeks ago, and we thought everything was taken care of. After a couple weeks, we noticed that he was withdrawn and his ear was bleeding a lot. It was a recurrence of the polyp – so aggressive that it had grown to larger than its original size in just three weeks. Because it was so soon after the adoption, the agency took him back in order to get him the medical care that he needs. It broke my heart to see him go and to see him suffering with his ear, but it was the right decision for his quality of life and best interest. Poor little buddy was only our cat for three weeks, but we will miss him.

But Stormy isn’t alone as the only dark lord in the house, because we introduced this guy – one of his littermates who still needed a home. Meet Vader.

It was a rough first day because he basically gorged himself on Stormy’s food, which his digestive tract was not ready to handle after being on different food at the pet store where he was placed. Let’s be frank. A lot of our Saturday was spent cleaning poop. But his stomach seemed to settle right down after that and we haven’t had any other issues.

He’s got a lovely white coat with an orange striped tail and orange ears, plus one small orange spot on his back. He and Stormy are already plotting their dark deeds together. (I know that’s what they’re doing when they’re playing and grooming each other.) It’s weird how quickly he’s acclimated – he’s sitting on the window seat next to me right now and it’s kind of like he’s always been here, even though it’s been less than 48 hours.

Vader and Stormy will probably make frequent appearances on Instagram, so follow me @nextgenhouse to see photos of their adventures (evil plots).

This week, Winter came to our house. (Yes, there’s a bad pun there, since the snow and frigid temperatures returned too.) Winter’s our new cat, who is Stormy’s pal, having been orphaned together. We adopted Stormy last month, and Winter got to come home to stay with us this week.


Winter is entirely white, and odd-eyed (one green and one blue). White cats often have a genetic abnormality that causes deafness, which Winter does have. It’s amazing to watch how he compensates for that, primarily with a strong sniffer. He is easily startled if you show up out of nowhere in his line of site, but he can feel vibrations in the floor and knows a bit of kitty sign-language. (!)

The first evening he hung out in the Fortress of Solitude (behind the Christmas boxes in the basement) and on top of the cabinet where we keep the cat food. But by the next morning, he was out and about and this morning, his second day, he’s curled up at my feet as I write this. I think he’s acclimating pretty well, though, as evidenced by his crawling slowly on top of Stormy last night when he was curled up on the couch.

Stormy was a pretty good sport about it and only hissed at him once. They seem to be getting along, which is nice. Since they already “knew” each other, they took a few sniffs when they were reunited and pretty much walked away unphased.

So now we have two feline friends. I can’t wait to see how they interact with each other (and us) over time. So far, they are attention hogs and we are more than willing to dish it out.

introducing Stormy, the newest member of Next Gen House 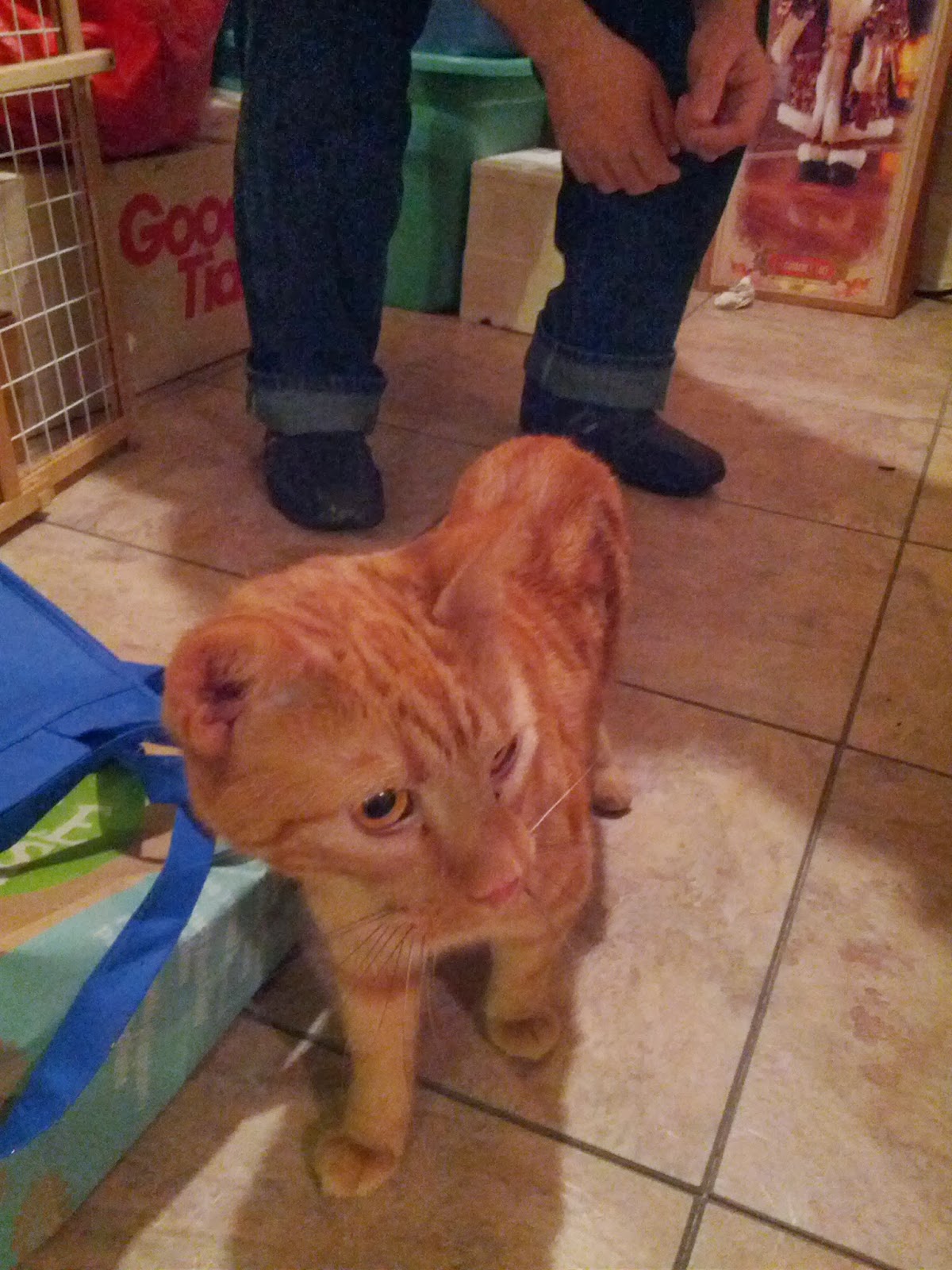 Last night we welcomed a new member of our family – a male, orange marmalade cat – who we named Stormy. Stormy is actually short for Stormageddon, Dark Lord of All, which is a reference to a joke from Doctor Who that makes us laugh every time we see it. (To view this moment from the episode, click here. It will make more sense and the name will be less weird, but still geeky.)

Stormy comes to us from Best Furry Friends, a local adoption group. We met him, ironically, on our way to the Humane Society to look at cats for adoption. We stopped by our local pet store (Pet Supplies Plus at Settlers Ridge) to get some supplies, and as we passed an aisle end-cap, a little furry paw reached out of a cage and “snagged” Mark. We stopped and looked into the big eyes of this beautiful little cat and well, kind of fell in love.

We put in an application on the spot, to adopt this cat and his sister, Joy, who was also on site. After talking with the adoption group, we found out that Joy already had a family ready to adopt her, but our little orange buddy was available, as well as some of his “siblings” from a group of cats orphaned together.

We were interested in two cats, particularly getting ones that already knew each other. After we were told that one of Stormy’s siblings would do best in a child-free home because he’s deaf (and needed for that reason to be adopted with one of his “siblings”), we were sold. That cat’s name is Winter – he’s all white with one green eye and one blue. And we will be bringing him home soon too – once his ear infection is all cleared up.

Stormy seems to be acclimating pretty well, after really not enjoying the car ride home. (Sorry that Carnegie’s roads are all jacked from the winter, Stormy.) He has come out to play with us and get some attention a few times in between hiding behind the tubs of Christmas decorations (which Mark has dubbed his Fortress of Solitude). We know he just needs to get used to our house and all the sights, sounds and smells. But if his purring and desire for petting and scratching is any indication, he’s going to love Next Gen House. We have only known of him for a few days and only brought him home last night, but he’s already a part of our family.

Once he gets used to our house, I hope to be able to really take some good photos of him – especially to show off the gorgeous pattern of his coat. But only when he’s ready (and if he likes having his photo taken as much as I do, probably never). Thanks Best Furry Friends, for giving us the opportunity to love and care for Stormy!

the first and the best 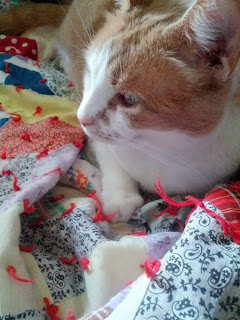 There’s an empty spot in front of our fireplace tonight. And when I walked in the back door today after work, the jingle bell that hangs on the handle made its usual noise, but no one came to greet me.

We lost our cat, Maggie, last week. She died in Mark’s arms after a recurrence of her mammary cancer made her health and vitality rapidly deteriorate. She was a very sick little cat, and we are grateful her suffering was short-lived. Mark buried her at my grandparents’ house, on land that is special to us, where many other beloved family animals have been buried.

I won’t ever forget the day that it happened or the raw sadness and grief that overwhelmed me in a way I hadn’t expected. This was the first time I ever really lost a pet, having not grown up with cats or dogs. I’d only ever had two hamsters and some random goldfish, which just isn’t the same.

But what becomes more amplified as the days have passed is the emptiness – the places she should be in our house and the things she should be doing. The window seat is empty. She’s not pacing back and forth in front of the staircase waiting for us to wake up and come give her attention or shake the bag of treats.

We curled up on the couch to watch Christmas movies yesterday by the light of the Christmas tree she loved to lay under, and I realized that I didn’t just miss her – I missed the weight of her on my lap and the soft vibration of her purring. She purred constantly – something I like to think was a marker of her genuine happiness and contentment.

Ironically, she wasn’t always that way – the year that we got married and Mark moved into my apartment? Well, she spent most of that year hissing her face off, primarily at me. I was a stranger and so was my apartment – and it didn’t help that our upstairs neighbor had cats, and sharing an HVAC system made Maggie constantly think other animals were near that she couldn’t see. A move to our house quickly turned it around and the gentle cat that Mark had known since he rescued her as a kitten came back – and we became fast friends. 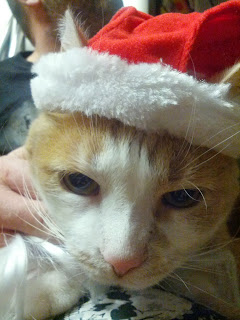 Last year around Thanksgiving she had surgery to remove the tumors that had developed, and the surgery not only gave her another 13 months, but somehow an even more loving and gentle nature, if that’s possible. She even let us put a Santa hat on her for all of 10 seconds. Back in 2009, I never thought I’d say this, but my heart is broken that she’s gone.

Maggie stands sentinel in my blog header – both the current holiday version and the regular one. And I’m going to keep it that way, since she will always be a part of the Next Gen House. I hope she could understand in whatever cat way she had, that in my heart, she will always be the first and the best cat.