I have this t-shirt that says “Buy Local” on the back. You hear and see that phrase a lot now. Small businesses use it, and so do businesses like Wal-mart and Whole Foods, which hype their willingness to carry foods from local providers. But if everyone’s using it, what does it mean? And has it become a useless marketing term?

“Local” isn’t defined in any official capacity by the government or some other body. And it can’t really be defined by state lines, since where we live in Pittsburgh, we’re closer to Ohio and West Virginia than our state capital. It’s also hard to define it by miles – do you count a day’s drive as local or a certain number of miles from your home? I’ve seen products labeled as “local” in grocery stores where a quick google reveals that I’d have to drive 8 hours to get to the place it was sourced. That doesn’t really feel local.

For my purposes, I’d casually define local as sourced from within my own economic region – the greater metropolitan area of Pittsburgh and southwestern Pennsylvania. I’d extend that to sourcing items within a radius I’d be willing to drive to pick up the item itself or to co-ops with drop-off locations throughout that same area.

By why buy local? Here are my 5 reasons. 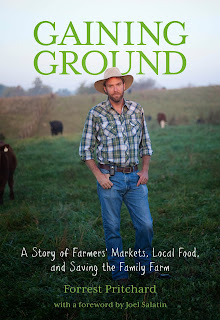 This book was a breath of fresh air after getting riled up watching Vegucated this week and reading some informative yet disturbing research on the threat of antibiotic resistance. As the subtitle would suggest, Gaining Ground is indeed the story of one man working to save his family farm. It’s hopeful and inspiring and beautifully written.

Frequently we hear from Big Agriculture about how supportive they are of farmers and making their lives easier. We see commercials idolizing the American farmer from these companies (*ahem*, Monsanto) and claiming that their whole company history has a legacy of upholding the American agricultural dream.

The most poignant part of this book illustrates how that is simply an illusion created in a marketing department. After years of Forrest Pritchard’s family farm taking on more and more debt and trying different things to make it profitable again, the family turned to commodity crops – corn, in particular. Managed by someone they hired to grow the fields upon fields of corn, they hope to get at least $10,000 from the harvest – enough to cover their debt payments at a minimum. The manager shows up on their doorstop and tells them they got “eighteen sixteen.” They are devastated, thinking they only made $1,816 on a harvest that they were expecting five figures from. The manager is embarrassed to relate to them that in fact all of the season’s work – all of the fields and harvesting, the months of time and the use of the land – has yielded them $18.16. Eighteen dollars, sixteen cents. Not enough to fill a car’s tank with gas.

I’d encourage you to read the book, since Pritchard relates that story in a way that rips your heart out, like you’re standing on the front porch of their house looking at the manager and seeing the truth hit them all squarely in the face. It’s at this point that Pritchard decides to turn the farm around – to abandon commodity farming for a different path. The rest of the book is the story of that turnaround – how they went from growing commodity corn to farming pasture – first for cattle and chickens and then for pigs and sheep.

I don’t want to give away all of the wonderful stories in this book – though I will say the one involving Pedro riding shotgun made me both laugh out loud and shed a few tears. (Pedro is a goat.)

To say the book is hopeful and positive isn’t to say the process of saving the family farm was all beautiful pastures and dollar signs. He even makes a point to say that saving the farm is a journey, not a destination. There is hardship and sadness along the way. But this book was a testament to the fact that good, slow food production can be done. Farmers deserve better than $18.16 for their essential contribution to our basic needs.

Reading about what it actually takes to start an operation such as Mr. Pritchard’s also gives you an appreciation for why pasture raised meats don’t cost $1.99/pound – and why they shouldn’t. We equate higher prices with quality in so many other areas – why can’t we get to that mentality with our food? When we have to buy an appliance, we don’t go for the cheapest one we can find because an appliance is an investment. Food is an investment too – particularly in our long-term health and well-being, to say nothing of the environmental and community investment.

Treat yourself to reading this book. Don’t be surprised if it makes you want a farm – or a Pedro – of your own.

CNN tells the story of Monsanto (Inspired Bites on Prevention.com)
2 million people across the world took part in the March Against Monsanto recently, and one of the only media outlets that covered it was CNN. Robyn O’Brien highlights their coverage in this blog entry and also links to this video, which does a great job of simplifying the issues that have been raised about Monsanto and GMOs. Definitely worth the 7 minutes to watch. (Even just to watch Michael Moss and his fierce eyebrows talk at the end.)

GMO Wheat Found in Oregon Field (NPR)
GMO wheat is not authorized for commercial planting, but an Oregon farmer found it on his land. Wheat is a huge export crop for U.S. farmers, which is why GMO wheat is not authorized to be planted. Other countries, particularly in Europe and Asia, won’t buy GMO products. More tests are being done to determine how the wheat got there and the extent of its presence, but it goes to show how easily these GMOs can sneak into our food supply.

Candy Won’t Make You Fat, Says Study Funded by Big Candy (PopSci)
This article showed up a lot on the Internet a week or two ago and was laughable. The National Confectioners Association funded a study that concluded that candy was not associated with any health risks. Wow! What strikes me, though, is that people are quick to laugh when a candy company funds research that promotes candy as part of a healthy diet, but we listen to soft drink manufacturers and other Big Food/Big Ag companies tell us the same things, with research funded by their own interest groups. When you see a new research study released that touts the health benefits of a food, look closely to see who sponsored the research  An independent or government group? Or industry?

Too Many Repeat Violators in Hog Slaughter, Inspector General Report Says (Food Safety News)
This statistic is shocking, but not surprising: “The USDA’s Food Safety Inspection Service issued 44,128 noncompliance records (NRs), but only 28 of the nation’s 616 swine plants ever faced suspension.” Even those don’t stay suspended for long, and many are repeat offenders. Read the list of offenses and I doubt you’ll be drooling for conventionally raised pork anytime soon. This is why we NEED to fight Ag-Gag laws – our government “inspections” are meaningless.

4 Questions You Should Never Ask at a Farmers Market (Smith Meadows)
I am proud that I’ve never asked these questions at a farmers market, though this article sheds some light on what it’s really like for farmers to participate in these markets.

Scotts Miracle-Gro  – the bird killing company? (Guardian via @unhealthytruth)
Scotts Miracle-Gro knowingly sold bird seed with unregulated and illegal pesticides for two years. These pesticides are poisonous to birds, but were added to control insects eating the seed in warehouses. Reason #562894 that I won’t buy anything from Scotts – not even their organic products.