Continuing the trend of super full CSA shares, week 16 did not disappoint. We got so much this week that I had to get out a Star Wars dry erase board and start taking inventory of what we have and how we’re going to use it, especially since we’re getting another load of produce from my grandparents’ garden this week. 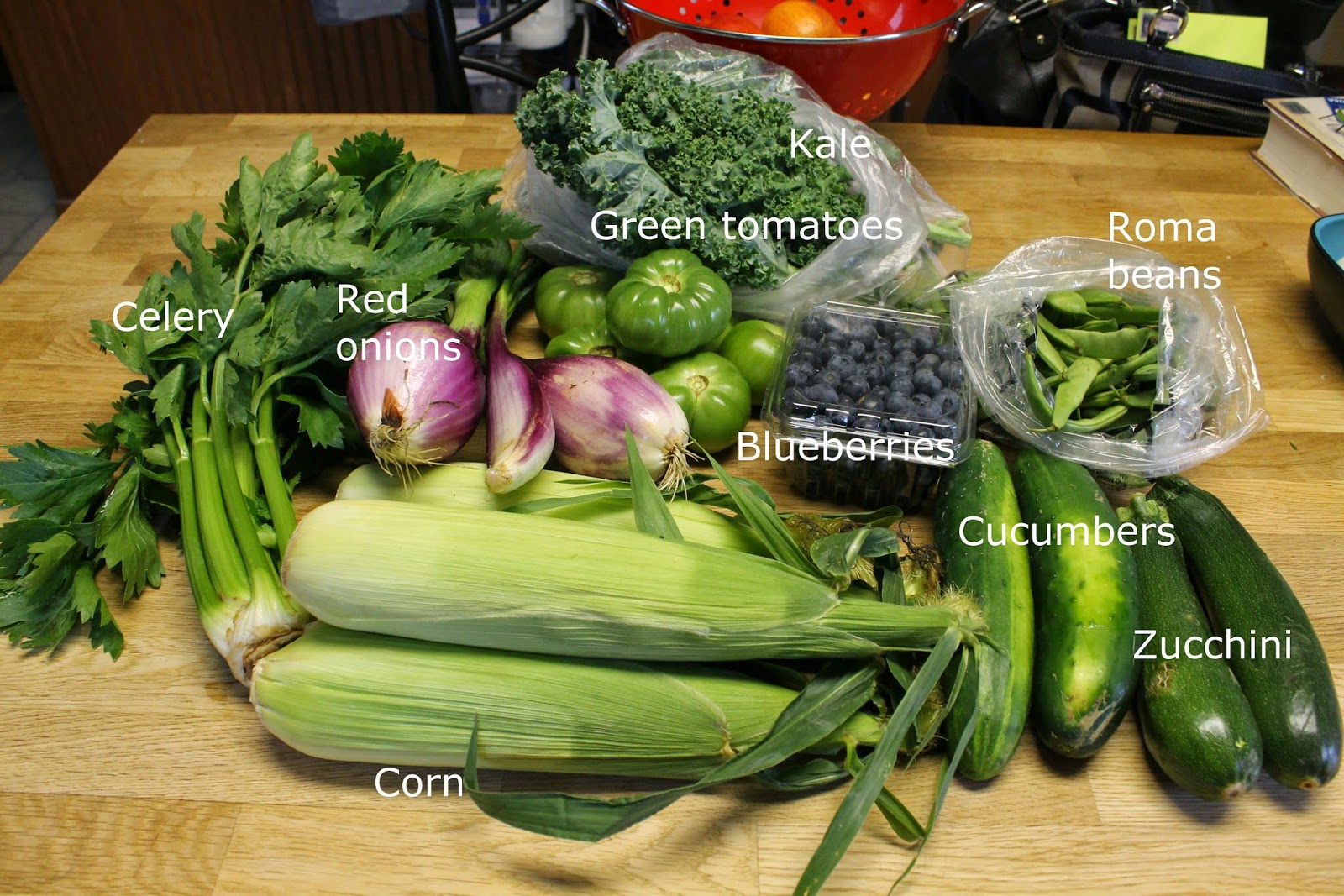 Corn and zucchini will definitely be made into this delicious looking Sweet Corn, Zucchini and Fresh Mozzarella pizza from How Sweet It Is (a local food blog – check it out!). Mark’s been experimenting with making pizza dough using his sourdough starter, so we’ll likely use his crust. Have I ever mentioned how amazing Mark’s homemade pizza is? Honestly, with the exception of Beto’s on Banksville, it’s probably my favorite pizza ever. (And Beto’s is only up there because of the unconscionable amounts of cheese.)

I saw these red onions and immediately thought salsa, since we are getting peppers in our own garden. They have a lovely, vibrant purple color. 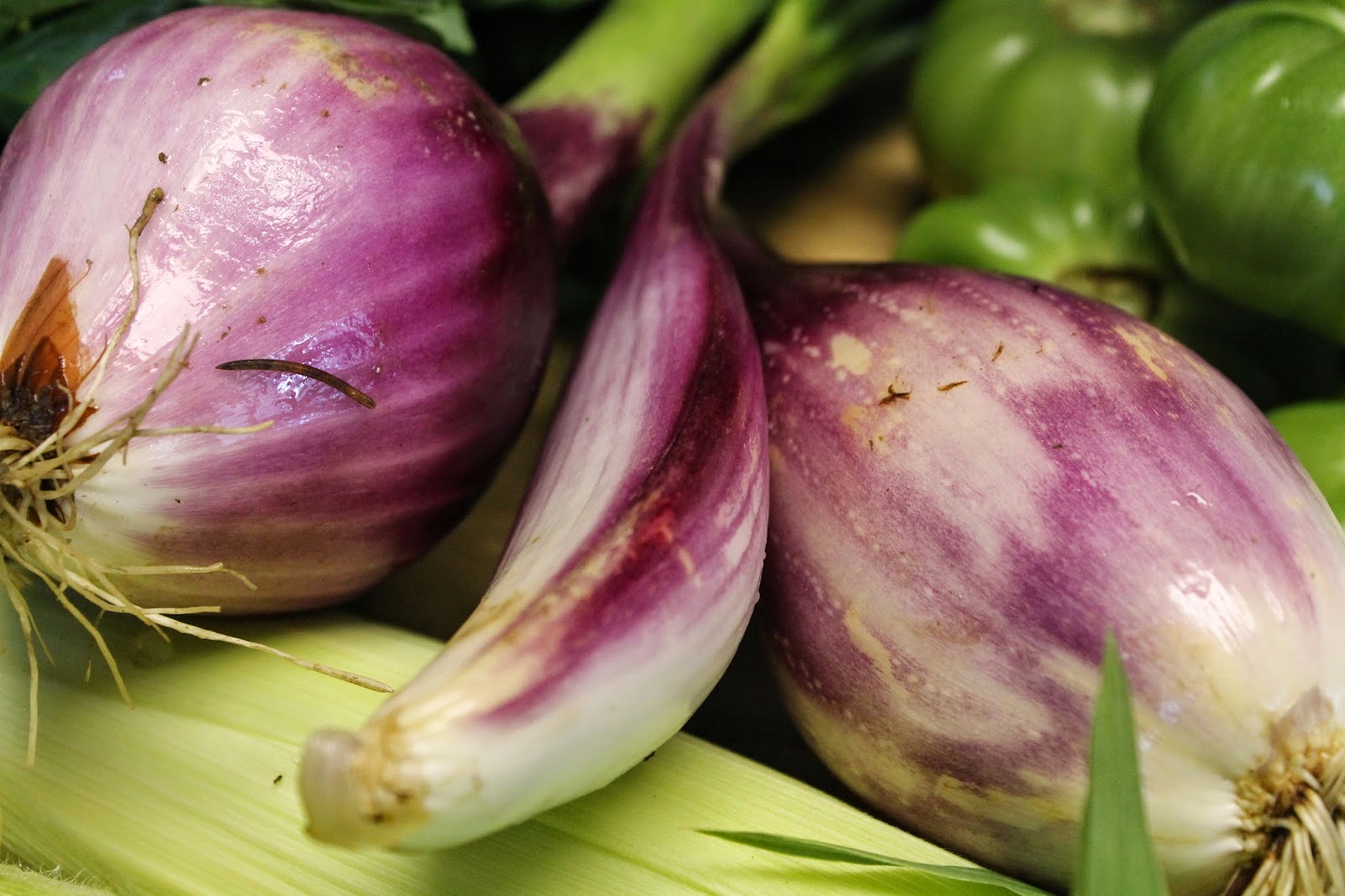 Cucumbers will be salad toppings and also refrigerator pickles this weekend. I have something like 13 cucumbers in the fridge right now, and I’m hoping they can hold on until I have 2 consecutive, uninterrupted hours to deal with them.

Blueberries will just be eaten by the handful, because we’re classy like that.

Mark wants to make fried green tomatoes with our green tomatoes, since he’s never had them before. Come to think of it, I haven’t either. Anyone have a good recipe? 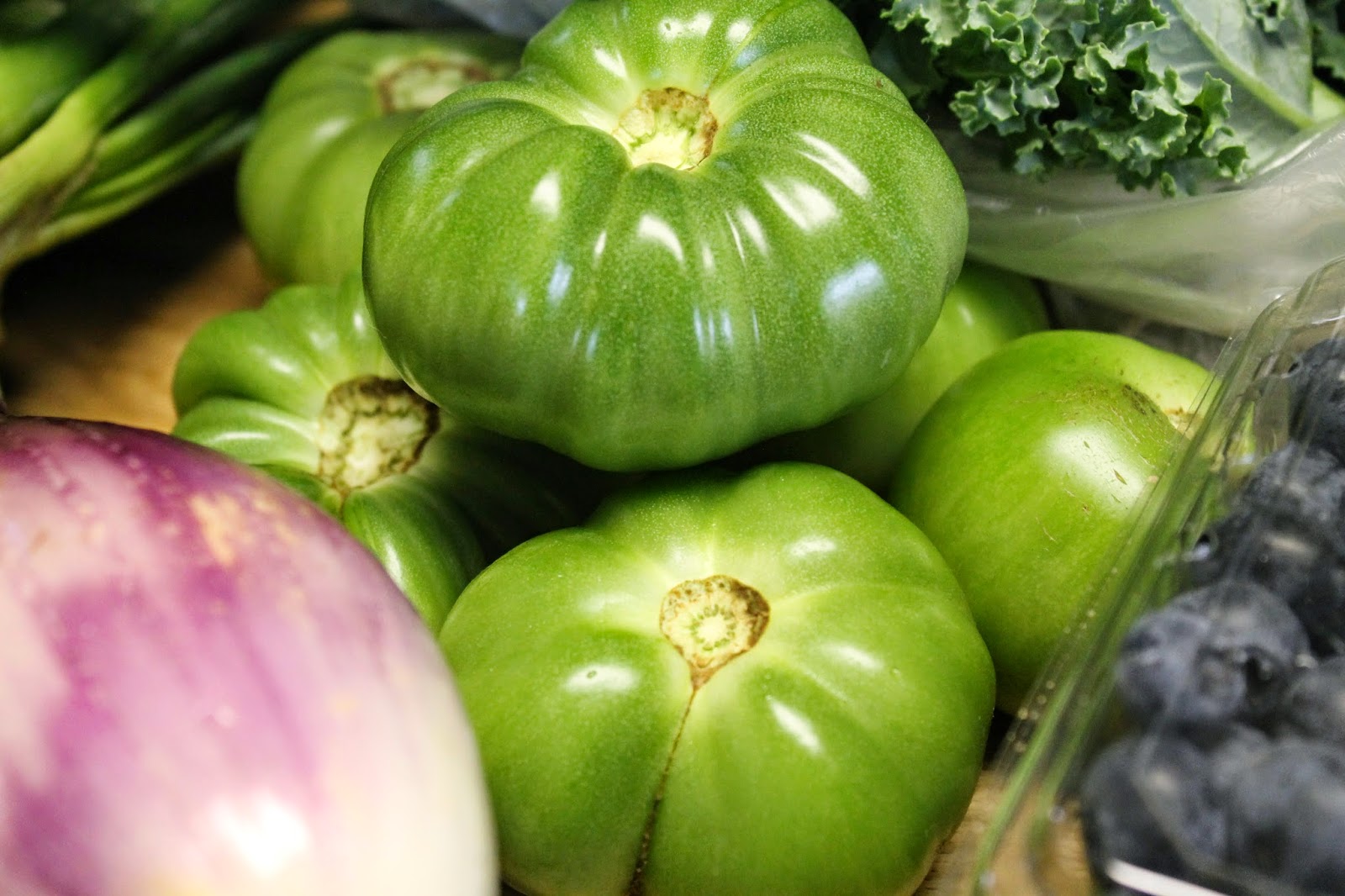 At first I thought these guys were some sort of pea, but upon closer inspection realized they were beans – roma beans to be exact. Penn’s Corner linked to a recipe for braised roma beans that sounds delicious. I saw “red chili flakes” in the ingredient list and I was IN. 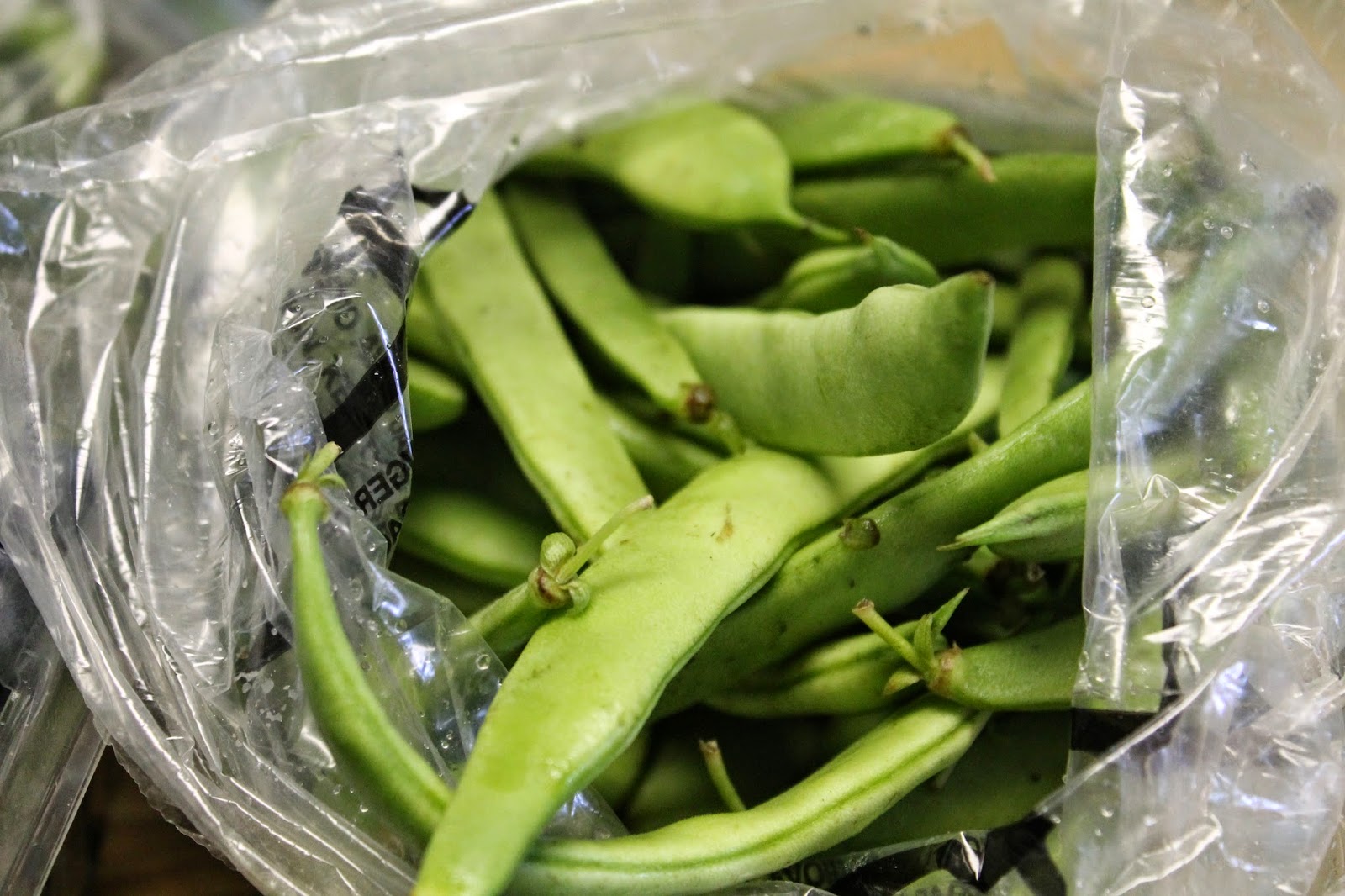 With this being the second bunch of kale in my fridge right now, it’s time to use it up. We enjoyed the zuppa toscana so much a few weeks ago that I might make it again, since we also still have a little bit of Clarion River sausage left.

New this week was celery, which I thought actually was the first appetizing looking celery I’ve seen in, well, ever. We’re not usually celery people and only eat it when it’s part of a mirepoix or some larger dish, but I’m going to be honest. I am kind of tempted to make ants on a log with these, like I’m back in elementary school with a Care Bears cookbook. (Yep, we had one of those growing up. I still have it somewhere, I believe. It would make an interesting experiment to see if I can use CSA ingredients with Care Bears recipes…) 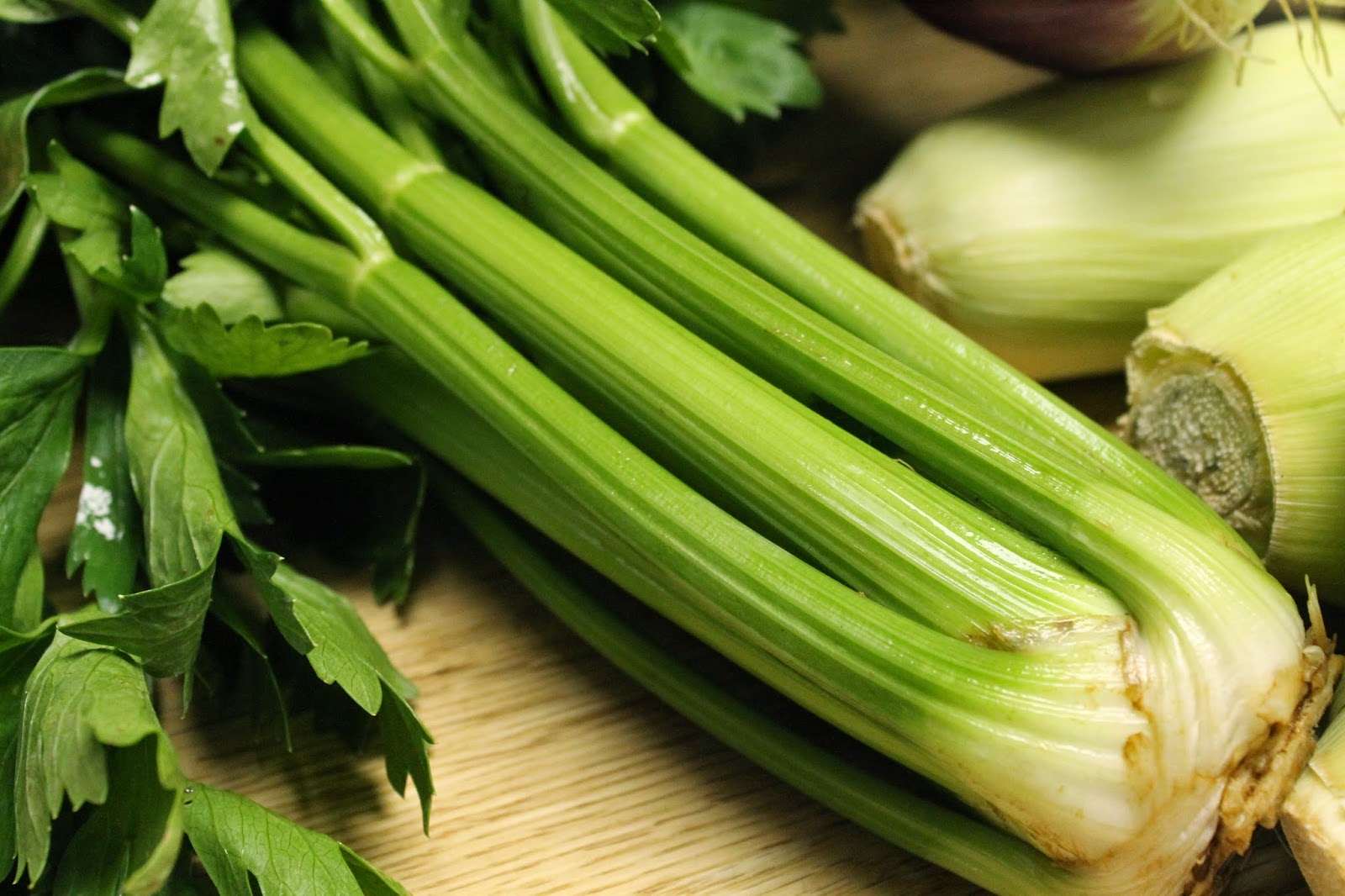 Is your fridge filled with produce right now? What do you have cooking?

how a garden grows: planting the plants