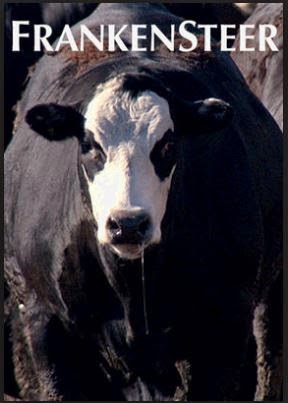 Have you ever had the experience of reading or watching something thinking it was current, and then realizing it’s actually a lot older than you thought? And then it dawns on you how scary that is? That describes my experience watching Frankensteer, a documentary I didn’t realize is 8 years old until after I watched it. Because the issues it raises are all still relevant today.

As far as the documentary itself, it was clearly on the low-budget side, without the polished feel of more widely released films. It’s also not an American film – it’s Canadian – so some of the information is geared toward Canadian governmental policies, though it does look at things from a “North American” perspective as well.

For me, the best part of the film was in its opening line – that in order to produce cheap food, we have taken a benign, naturally flatulent vegetarian and turned it into a cannibal and vampire. We push these creatures to within an inch of their life until ultimately they lose it in a slaughterhouse to end up on our plates.

The film makes its way through a discussion of the dangers of growth hormones and sub-therapeutic antibiotics, two things that in 2014 the public is demanding be removed from our food supply more than ever. In discussing the differences between government policies on these items and showing the disparity between what Europe feels is safe and what North American nations do, it occurs to me that it’s amazing how we think that science and nature relate differently on this issue depending on your country’s borders. I think it’s safe to say that if it’s not safe for a member of the European Union, it’s not safe for me. Why that science cannot cross national boundaries is beyond me.

Frankensteer lays out all the basic reasons to avoid industrially raised beef, and in particular the health risk to humans of mad cow disease (not as much of an issue now as it was in 2006, but still nothing to dismiss) as well as E. coli and food borne illness. We shouldn’t have to take a product home from the grocery store that’s intended for consumption and have to treat it like toxic waste until cooked.

Frankensteer doesn’t get into industrial agriculture’s effect on the economy, environment or workers, but that’s understandable for a film that’s only 44 minutes long. Honestly, there are 500 page books on the subject that can’t even cover it all. All the more reason to not eat or purchase it.

For me, I try not to eat meat at all when I don’t know where it came from (as in, which farm). However, lately I’ve found it harder to make those choices when traveling, especially when I need protein and there are no vegetarian options that include any. While I didn’t find this film incredibly compelling in and of itself, it served as a good reminder for why I don’t eat industrial meat and a push to recommit to being strict about it in my own diet, even if it means making sacrifices.