raw milk: beyond the hype

A lot of topics in the world of food politics and safety can get people’s feathers ruffled, but one of the subjects that seems to bring out the most vitriol and judgment is raw milk. Let me state unequivocally that raw milk is not for everyone and no one should ever be pressured into eating something that makes them uncomfortable or denied the right to eat what they want. This is just one person’s perspective on why raw milk is what we drink in our house. 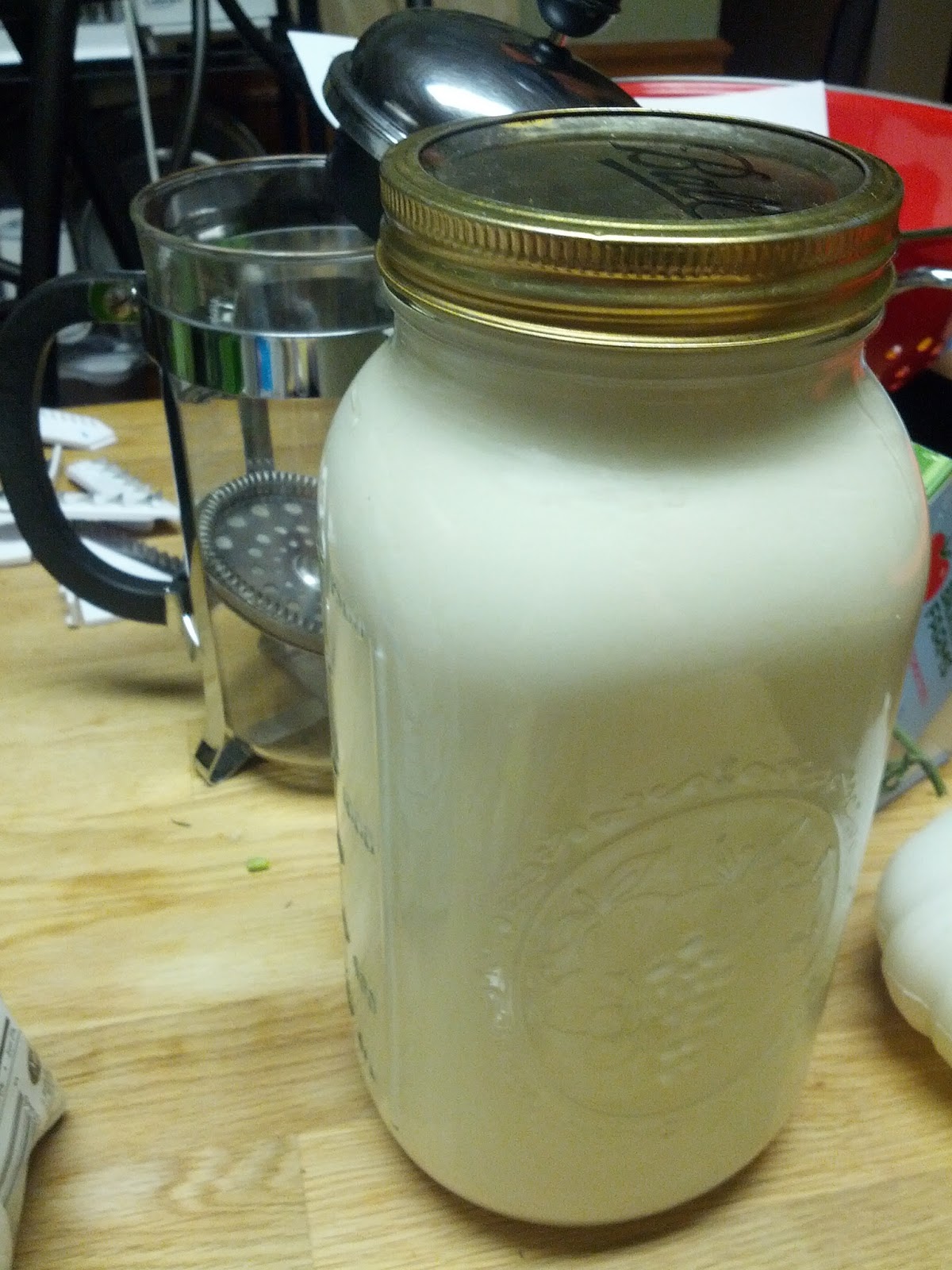 Raw milk is exactly what it sounds like – milk straight out of the cow. Unpasteurized and unhomogenized. Before you can understand why raw milk is different, you have to understand the difference between pasteurization and homogenization.

Pasteurization refers to the process of heating milk to a particular temperature to destroy pathogens. All milk that you will buy in the store is pasteurized, at least in Pennsylvania. (Other states have different laws.) Pasteurization does kill harmful bacteria in milk, but it also removes the good bacteria that are present, and it removes vitamins that are also naturally present. Thus, when you see milk labeled “enriched with vitamin this and that” it means that vitamins were added back in after processing.
Homogenization is a process that uses immense pressure to emulsify the fat and water in milk. In whole milk, the cream will rise to the top, leaving what we know as 2% milk underneath. To get whole milk, you shake the container to redistribute the cream back in. Alternatively, you pull the cream from the top and use it separately, and drink the 2% milk. Americans don’t like to have to deal with the separating parts of milk, and they prefer to have options of varying levels of fat, so homogenization was born. Pressure is applied to the milk, which homogenizes it (after whatever amount of fat/cream is removed from the milk.)
You can drink pasteurized milk that isn’t homogenized, and you won’t be taking any of the risks associated with drinking raw milk, which is the potential for harmful bacteria. This is why the CDC recommends that you only drink pasteurized milk. But at Next Gen House, we don’t. And here’s why.
While it is true that every time you drink raw milk you are taking the chance that some bad bacteria could be in there and could make you sick, this chance is incredibly small when you source your raw milk like we do – you don’t have to worry about sanitary conditions as much as you do when you have hundreds of cows smashed together and sharing the same milking equipment. Plus, we know that our farmer milks that same cow to provide milk for his own family. He has more reasons besides profit to make sure the milk is safe.
Other reasons I drink raw milk include:

(1) I try to eat my foods as minimally processed as possible, which means I only drink whole milk and I prefer it not to be homogenized. I am perfectly capable of shaking a bottle.

(2) I want the benefit of the vitamins and “good bacteria” that are naturally present in milk, particularly because of my digestive issues and the fact that I cannot eat fiber supplements or many high-fiber foods due to my thyroid medication.

(3) I like the taste of raw milk and how it varies slightly through the seasons, as the cow is eating different foods and plants.

(4) Whether or not I will continue to drink raw milk for my entire life, I believe in the right of people to eat what they want, and will support people’s rights to drink raw milk. I know the risks and choose to take them, just as other people take risks every day by consuming alcohol, driving a car or smoking cigarettes. I don’t really think the risk of raw milk is akin to smoking a cigarette, but the point remains that the government does not control all risks a person can take to his/her bodily health, thus it should stay out of my milk choices.

(5) Quite simply, it lasts longer when it comes straight out of the cow. 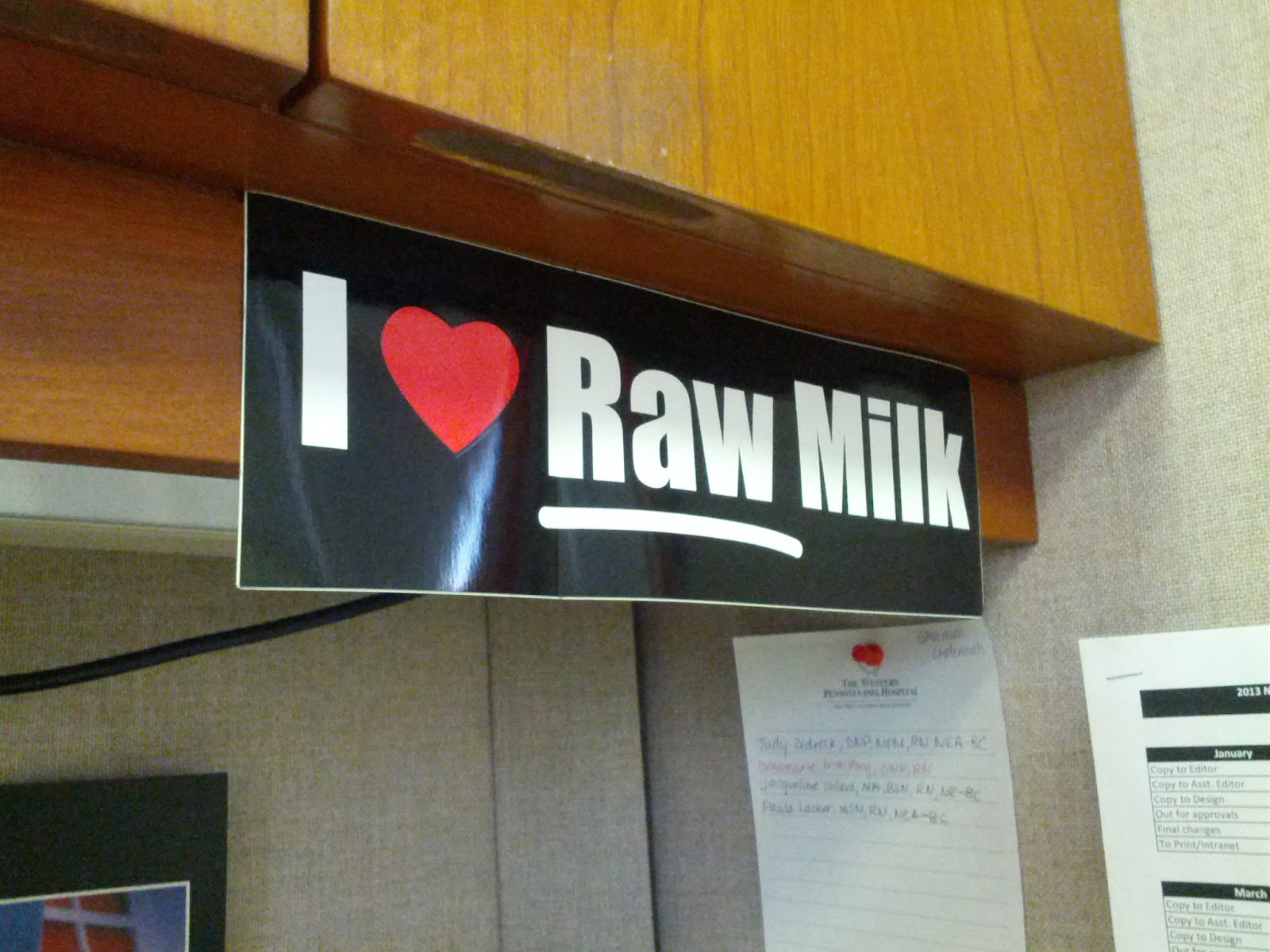 Cubicle activism
My ultimate point is that not every person who drinks raw milk is a back to the earth hippie who thinks that raw milk is a cure-all for every last disease on the planet. It’s milk, people. I’ve seen the videos of people who practically worship at the altar of raw milk and I think they’re nuts. BUT, frankly, I’m more scared of what’s in industrial meat than I am of what’s in my raw milk. But beyond all the hype and the fear mongering, there are solid reasons why a person would make the choice to drink raw milk and there are solid reasons why a person would choose to only drink pasteurized milk.
Raw milk isn’t for everyone. When I bake for people or for parties, I use pasteurized, non-homogenized milk from Manchester Farms, because I don’t feel like I have the right to make the choice of raw vs. pasteurized milk for other people. It’s all about what risks you are willing to take, and that is not something that one person can decide for another.
Older
reduce your food waste (and your budget!)
Newer
make it yourself: indoor smores and chocolate chipper champs